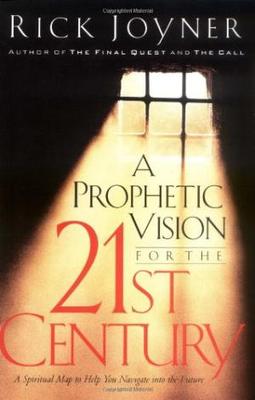 A Prophetic Vision for the 21st Century: A Spiritual Map to Help You Navigate into the Future

Rick Joyner says, "We have tended to over-focus on the end of the age-the end times. But this is not just the end, it's the beginning of a new age when Christ will rule over the earth! For the church to reclaim the high ground of hope for the future, we must begin to proclaim the beginning, the coming of the kingdom." In A Prophetic Vision for the 21st Century, Joyner discusses why revival tarries for America, what it means to be delivered from the Mark of the Beast, the rise and fall of America, the greatest awakening, a famine in the land, and practical ways to serve in the latter days. It includes encouragement for weary church leaders as well as the second part of The Hordes of Hell are Marching, illustrating the unified church rising as an army in the most pivotal battle of all time between the light and darkness.

A Prophetic Vision for the 21st Century is a vision for the future. It is also a call, a manual, and a strategy for mobilizing the most powerful army that has ever marched upon the earth - the army of God.

This is a call for Christians, who have been privileged to live in possibly the greatest times of all, to arise and fulfill their destiny. It is a manual for how we can use the divinely powerful weapons we have been given to confront the great darkness that is now sweeping the earth. It is also a strategy for how we can begin to demonstrate the power of the kingdom that is coming.

In this book you will find sound teaching on:

How to know God's calling for your life

How to defeat the enemy of your soul

How you can be a part of the revival that is now sweeping the earth.

Are you ready to answer the call?

The kingdom of God is surely coming. Will you answer the call to be a part of it, and to stand for truth, righteousness, and the liberation of the world, which our king purchased with his own blood? This is the greatest call of all - and it is your call.